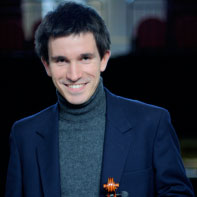 Equally at home on both the modern and baroque violin Simon pursues a varied career as violinist, presenter, and teacher.  Simon was appointed Artistic Director of the Bristol Ensemble in 2021 and has directed a number of projects with them since joining the ensemble in 2011.

Starting the violin at the age of thirteen Simon went on to study at both the Royal College and Royal Academy of Music with the assistance of the Rowsby Woof scholarship.  Since his London debut at the Purcell Room in 2004 Simon has performed and recorded with most of the orchestras and period ensembles in the UK, and has made numerous live broadcasts on the BBC, as well as American, Mexican, Polish, and French radio.

As a soloist and director Simon has guest-led ensembles throughout the UK, recorded numerous commercial soundtracks for film and television, and performed as recitalist and concerto soloist at a number of diverse venues from St. John’s Smith Square, London and St. George’s, Bristol to a funeral parlour in New York.

As co-founder of the Florentine Arts Ensemble Simon has curated and presented events at the National Gallery in London on the relationship between music and art, as well as the Holburne Museum in Bath and at galleries across the UK.

Simon is also Artistic Director of the Somerset International Festival of the Arts, an organisation which promotes live music making in rural communities along with a musical education programme for schools throughout the year.

Simon lives in Somerset with his wife and two children, and when not playing with the Bristol Ensemble can be found exploring the local countryside or restoring a classic car…